skip to main | skip to sidebar

I even called back home to see how 2008 was working out in its final hours and to let everyone know that 2009 was much better. Christine and I went into Hongdae for the night to join in the many parties that were happening in Seoul. While eating dinner, Christine taught me how to say "Many fortunes in the New Year" in Korean (Happy New Year). I tried it out on the cashier before we left to try and impress her. Let's just say I'm glad we were the last customers in there.

After dinner, we went to a couple of bars to have some drinks and listen to some music. We went to Jane's Groove first shortly before midnight. We had time to get a drink (or two in my case) and dance before everyone was screaming "Happy New Year!" This bar was pretty cool, but the band was nothing worth noting. What was really cool, was this bar had a Nintendo Wii setup so you can play Wii Sports while enjoying your beer and listening to music. Christine kicked my butt in bowling... 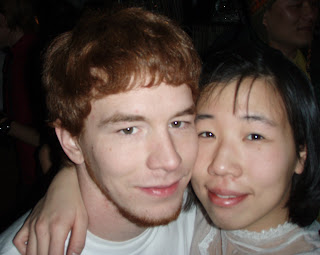 Our first photo of 2009. Or maybe it was our last photo of 2008? I don't know...
After my embarrassing loss, we went to Club FF (Funky Funky). The bouncer convinced us to check it out saying he'd throw in two free drinks with our cover fee. After deciding this was a good deal, we went ahead and bought our way in. Then we found out that everyone was getting free drinks with their cover fee. My negotiation skills felt shamed. The first group we saw had a really good funk sound. We found out the drummer was a guy we had met back in Ilsan a month or two ago while at a coffee shop. An ex-Marine from the Special Forces now teaching at a preschool in Seoul. (I think they made a movie about this with Vin Diesel...). The next band was the last group for the night. They played a lot of covers from Zeppelin to Weezer. It was a good show and a lot of fun to hear some favorites being played onstage. 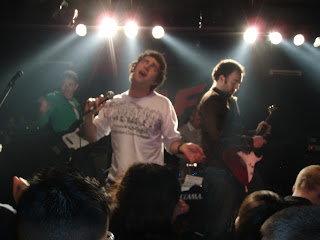 I was dreaming of a white Christmas, just like the ones I used to know. Unfortunately, anytime we get snow in Ilsan, it is gone within a few hours. We did however, have a good Christmas celebration. On Christmas Eve, Sun took Christine and I out to lunch before work. He had asked us the day before if we would join him for lunch and not to tell anyone else that we were meeting. We spent the night wondering what this was about. Turns out, he just wanted to treat us to a nice lunch on Christmas Eve. We bought him a bottle of wine for Christmas from the grocery store across the street from L*Bridge. When I told him I didn't know if it was good or not, he simply stated, "It doesn't matter, it is alcohol. It will be good."

I had brought tangerines into work to give to all of the other teachers and quickly found out that I had been outdone by a long shot. We had three different cakes during our initial prep time. Later in the day, we all got pastries (something we used to get on a weekly basis until this last month). At the end of the day, someone else came in with a platter of cookies, kimbab, and sweet potatoes. I think most people forgot about the tangerines.

We came home Christmas Eve to find that the package from home had arrived. We tried to hold out and not open presents until Christmas, but midnight couldn't come soon enough. Our stockings were both stuffed with goodies and the presents were sitting under them just waiting to be opened. We opened presents at 11:00 PM on Christmas Eve. We got tons of goodies from each other and from home. 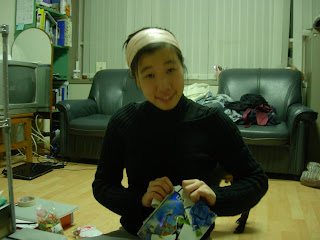 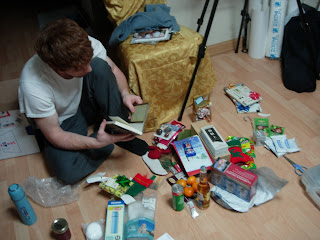 On Christmas Day, we had decided to eat at an International Buffet that we had seen earlier in the week. When we arrived at 6:30, we found out the wait was over 2 hours. I had planned to take full advantage of this buffet and hadn't eaten all day, so we decided to go somewhere else. We went to Wazzle to eat Chinese food instead. It was an incredibly nice restaurant with a great view of Western Dom.

While walking home, we bought a cake from one of the bakeries. Apparently, this is the thing to do on Christmas as almost everyone we saw was carrying a cake. We went home and indulged in a white cream cake before grading some papers for class tomorrow. 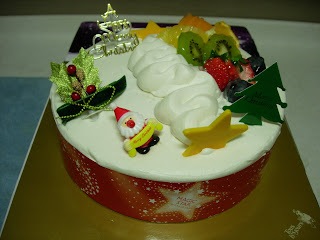 Back by popular demand!

We have been informed numerous times that the blog has not been updated in a while and it is time for me to stop celebrating my 24th birthday. Life must move on after 24 I suppose…

Truth be told, Christine and I have been kept extremely busy both in work and leisure. Our first semester ended last week and we both got new schedules for the new semester. After one day of the new schedule, we both can tell this semester might be tougher than the previous. I have two more classes this semester (8 classes in a row on Wednesday) and Christine has been moved from a speaking teacher to a reading teacher. What was fun today was seeing some of the kids I had last semester in lower classes moving up to the next level. Some of my favorite students are in my class again making it that much more fun. I’ll talk more about L*Bridge and the students in a near future post. We have realized that after 3 months of being in Korea, we haven’t posted once about work.

Christine and I saw Jens Lekman in Hongdae this past weekend. I had only heard his music from Christine’s iTunes collection a few times but had a lot of fun at the concert. We got to the bar early enough that we were able to get pretty close to the stage. One of the opening bands was a cover band playing a lot of western rock music. I wished I had gotten a picture of these guys because they rocked! The small bar was packed (mostly foreigners) from front to back by the start of his show. It made me realize how many people in Korea teach English. 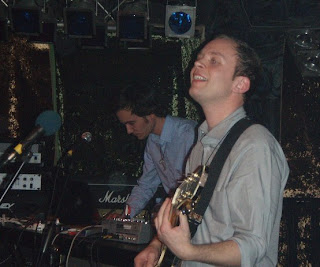 I have been bouldering at Bukhansan National Park almost on a weekly basis. The weather has stayed warm enough that I can still climb mid morning to evening without getting too cold. Unfortunately, this means I cannot climb before work anymore without climbing in 30 degree temperatures. I have met a group of people that have been developing the area for over a year now and have started climbing with them regularly. This past Sunday, I finally climbed a problem (Red Chili V3) that I had unsuccessfully attempted earlier this month. It is now the highlight of my climbing at Bukhansan. 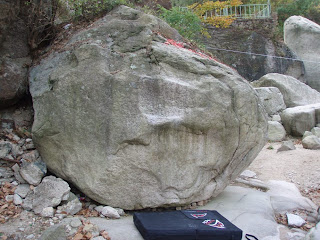 One of the smaller boulders at the base of the River Beds at Bukhansan National Park.

We had an eventful past seven days last week. It was our anniversary last Tuesday, so we got up early and took the subway to Hongdae (college district of Seoul) to have lunch and browse around. Ilsan has tons of restaurants, but we were craving middle eastern and something new, so we ventured out.

We settled down at a restaurant called Silk Road. We had felafels and french fries - as good, if not better than what we could have gotten in Bloomington. 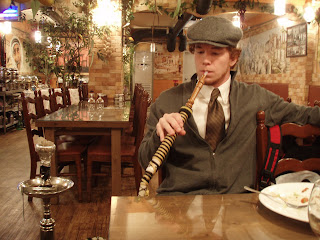 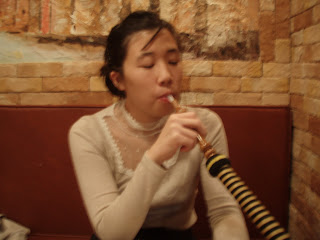 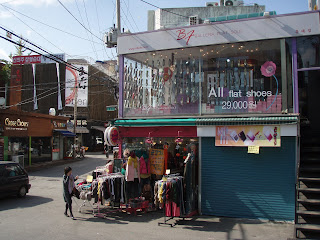 Hongdae is pretty popular with foreigners because it has plenty of ethnic food - Mexican (which is where we went for Joe's birthday), Middle Eastern, Italian, etc - and also a great night life, with tons of live music.

Joe's birthday was Saturday, so we went to the flee market. Flee market is kind of the literal translation, but not entirely correct - the place we went to had 9 - 10 stories high department stores filled entirely with people selling clothes. It's where most clothing stores in Korea get their supplies from, so it's probably the best place to go shopping, as you're eliminating the middle man and presenting yourself with the most options possible. We both got nice winter coats - Joe's was a hard find, as he has unusually broad shoulders. We also encountered a bunch of young hipsters who wanted to talk to Joe (in decent English) how street tough they were, and how their shirts (with a bunch of obscenities) was straight from the streets of New York. Hilarious. We'll both post pictures. Between the two of us, six rabbits gave their lives for the lining of our coats. This made me a bit upset.

We went back to Hongdae to get Mexican. We got tacos and qusedilla, both a bit pricey but really good. 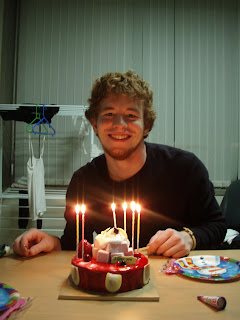 This is Joe with his birthday ice cream cake from Baskin Robbins. Baskin Robbins is the take over every block chain store in Korea, kind of what Starbucks was to New York not too long ago. 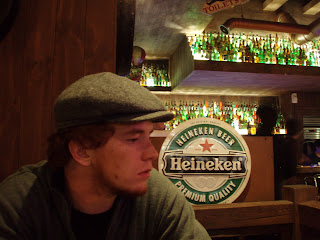 Finally, Joe at the WA bar. It has a variety of beers from all around the world. Joe's choice was a hoegarten. He's probably looking depressed because we went to a board game cafe prior to this picture, and I kicked his butt.
Posted by jc at 12:22 AM No comments:

This week is important for several reasons:

1. Tuesday is our 2 year anniversary!
2. Joe's birthday is Saturday, a very many 24 years. He has white hair to prove it.
3. Last full week of campaigns! We both have our absentee ballot for Obama sent to the states. BBC news had an interesting front page story - Indiana: History in the Making

It's whether Indiana can overcome its racist history and vote for a black man. Of course, to highlight most countries' image of Americans as fat, ridiculous people, they selected small town grandmas who pray, play bingo in huge American flag hats, and still say the word 'negro.' Either way, Indiana is now a 'moderate blue state' in some polls, and we have our fingers crossed!
Posted by jc at 1:40 AM 1 comment: 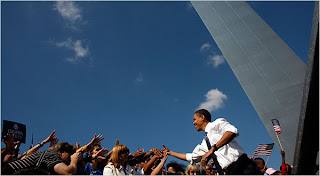 We both have been feverishly following the campaign, watching the debates on TV or online and constantly refreshing the NY Times homepage at work. It's hard not to be excited about the campaign Obama has been running, the prospect of Indiana going Blue and our votes actually counting! We both have our absentee ballots and will scan and e-mail them asap.

We're going to Lotte World tomorrow - the largest indoor amusement park in the world. It's the Disney World of South Korea.
Posted by jc at 5:34 AM 3 comments:

The dog that spoke English 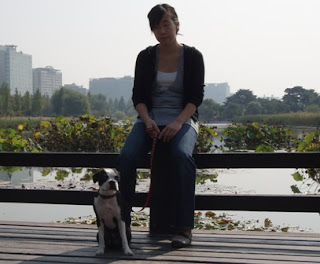 Sawyer is here! After a long flight from Indy, he has safely and legally arrived in South Korea. He enjoys walking around in the city and taking in all of the sights and new smells. He has become an instant celebrity here as there are no other Boston Terriers in this area. Some great lines Christine has overheard while walking the dog:

jc
We are both living in South Korea teaching English as a second language to elementary aged students. We arrived in September 2008 to work at L*Bridge for one year. It's like a reality TV show without the cameras and obscene backstabbing. See you in 2009!